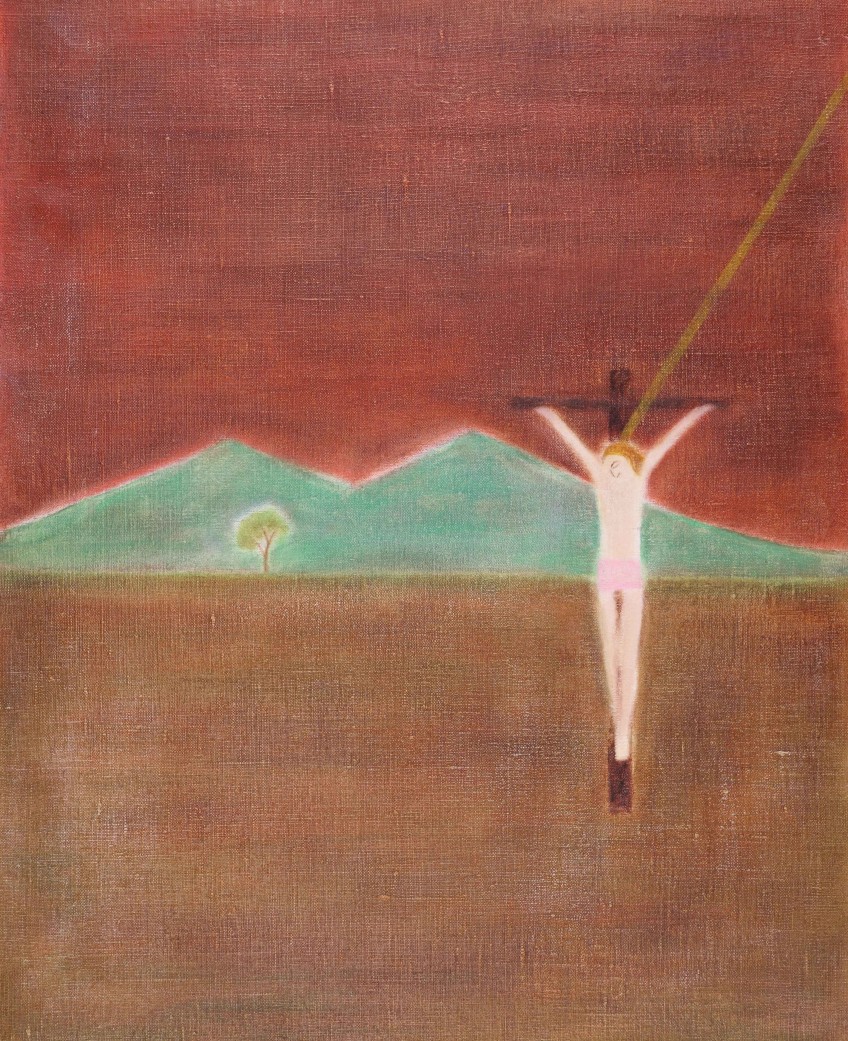 Works by some of Scotland’s most important and influential modern artists go up for auction next month at a sale of Modern British & 20th Century Art at the prestigious Woolley & Wallis Salerooms in Salisbury.
Among the 30 Scottish artists featuring in the auction is Edinburgh-born painter Craigie Aitchison whose oil of the Crucifixion has been valued at between £20-£30,000 making it one of the most highly valued works on offer.
Aitchison, who died in 2009, was well known for his paintings of the Crucifixion, a fascination said to have been inspired after viewing Salvador Dali’s Christ of St John of the Cross at Glasgow’s Kelvingrove Gallery in the 1950s.
Of particular interest to those who follow the fortunes of Glasgow’s “Old Firm” – Celtic and Rangers football clubs – will be a portrait of former managers Martin O’Neill and Dick Advocaat by Peter Howson. Howson is one of Britain’s leading figurative artists; his famous subjects have included David Bowie and Madonna and his work has appeared on postage stamps and on then-First Minister’s Alex Salmond’s official Christmas card in 2013 as well as contentiously on the cover of The Beautiful South’s album Quench. A second of Howson’s works, Rise, a pencil drawing of Jesus, is also up for auction.
Other notable pieces to go under the hammer include a Corsican wayside cemetery, painted by Anne Redpath, considered one of the great figures in 20th century Scottish painting. Valued at £10-£15,000, it was painted when she visited the island in 1955 and combines her interest in architecture and landscape.
The auction, on December 4, also includes six works of art by John Bellany whose work now hangs in major collections including The Museum of Modern Art in New York and London’s Tate Britain.
“We are delighted to be offering so many Scottish artists, from a variety of collectors, in this sale,” said Paintings Specialist Victor Fauvelle. “We have built a strong base of Scottish buyers who I am sure will be keen to bid in the auction.
“The paintings include works by John Bellany RA, Dame Elizabeth Blackadder RA, RSA, Sir Robin Philipson RA, RSA, Sir William George Gillies RA, RSA and Joan Eardley RSA as well as some by lesser known artists such as John Brown and Philip Reeves RSA.
“Earlier this year we held a very successful single-owner collection which included a large number of Scottish artists, so we are pleased to be following on from this with so many good Scottish paintings again this winter.”
Woolley & Wallis’s final sale of paintings and sculpture of 2018 has just over 500 lots on offer and telephone and other bidding details are available on the website at www.woolleyandwallis.co.uk
Earlier this month, The Northern Girl, a painting by Yang Fei Yun, formerly owned by the late Anita Roddick founder of The Body Shop, was sold at auction by Woolley & Wallis on behalf of the Roddick Foundation for £1.7million.