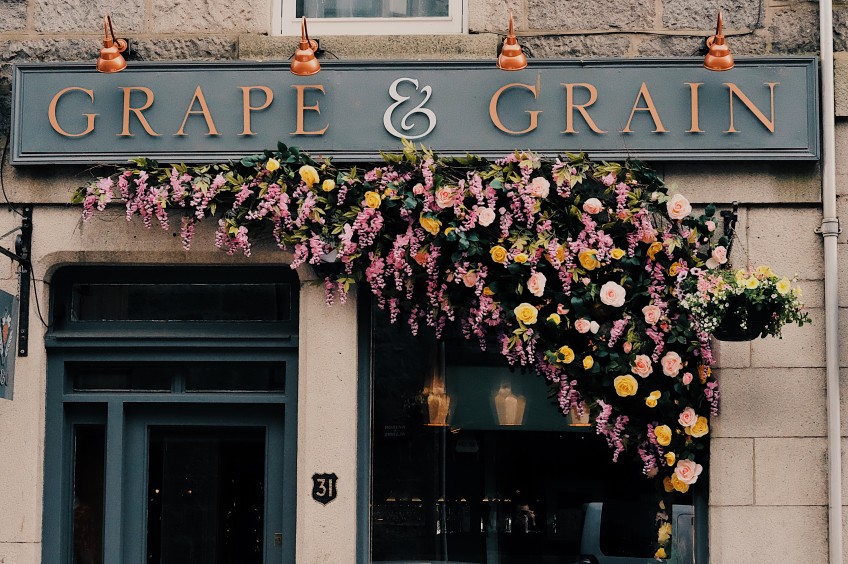 Grape & Grain, Aberdeen’s award-winning wine bar, is one of five bars across Scotland in the running for a tourism Oscar at this week’s Scottish Thistle Awards in Edinburgh.
Organised by VisitScotland in association with a number of other regional and national agencies, the awards ceremony on March 14th recognises excellence in Scotland’s tourism industry.
The Best Bar or Pub category celebrates the role bars and pubs play in the visitor experience, providing them with a diverse choice of venues from sophisticated cocktail bars to traditional country pubs.
Grape & Grain secured its place in the national final after being named winner of the Best Bar and Pub category in the Aberdeen City and Shire Tourism Awards last November. Other regional winners in the national finals for the same category are The Boudingait, Cupar; MacGregor’s, Inverness; The Guildford Arms, Edinburgh and The Clachan Inn, St John’s Town of Dalry.
“We were delighted to win the regional award and honoured to be representing the City and Shire at national level,” said proprietor Jeanette Forbes. “We work very hard to give Aberdeen a venue it can be proud of and credit as always must go to our staff for the work they do in keeping our standards high.”
Since opening on the city’s Thistle Street in September 2017, Grape & Grain has had remarkable success. Last year, it was nominated as one of Scotland’s most stylish bars in the Scottish Style Awards and was the only Aberdeen venue to be featured in the Sunday Herald’s 25 Most Fabulously Fashionable Places to be seen in Scotland. It also won Best Wine Selection in the Molson Coors Scottish Entertainment and Hospitality Awards, New Operator of the Year in the British Institute of Innkeeping (BII) Scotland Annual Awards and Best Bar in the Trend Life With Style Awards.  Jeanette Forbes received a Special Commendation in Business Women Scotland’s Bar of the Year (Female Manager) in the BWS Hospitality and Tourism Awards.