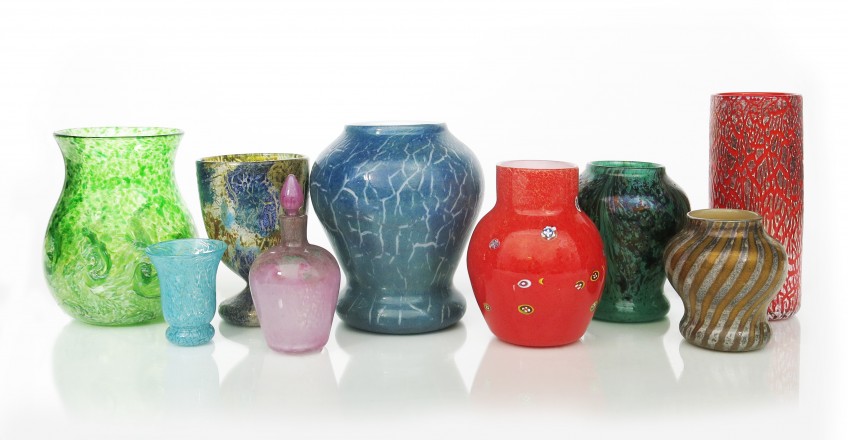 A private collection of 21 pieces of Monart Glass, produced by the Moncrieff glassworks of Perth in the early to mid-20th century, will be among the highlights of the Clarice Cliff, Art Deco & Design auction to be held later this month at the prestigious Woolley & Wallis Salerooms in Salisbury.
Collectively valued at almost £14,000, the 21 lots were collected over the past 20 years by Robert Morgan of Nottingham.  Included are 14 vases in an eclectic range of shapes and patterned colour variations, bowls, delicate scent bottles and stoppers and two characteristic mushroom-shaped glass lamps and shades.
Valued at up to £1,500 and £1,800 each, the two lamps are among the most valuable items in the Morgan Collection. Other lots of particular note are two rare vases, one which is inlaid and the other which is surface decorated, valued at up to £1,200 and £1,500 each and a Monart Ware bowl which was the first piece purchased by Morgan for his collection in 1968.
“This small collection of Monart glass perfectly shows the level of skill reached by craftsmen working in Perth in the 1930s,” said Michael Jeffery, Associate Director and Head of Design at Woolley & Wallis. “It clearly displays the diversity of shape, from scent bottle to table lamp, and decoration which showcases the highly developed glassblowing techniques and the use of different materials and processes which give every individual piece its unique patterning and colouring. It is an excellent opportunity for the collector to invest in these Masterpieces of British 20th Century glass.”
Established in Perth by John Moncrieff Snr in 1865, the North British Glassworks was primarily an industrial glassworks until 1924 when Isobel Moncrieff, wife of then owner John Moncrieff Jnr, suggested that Salvador Ysart, a Barcelona-born glassblower who worked for the company, create a modern glass art range.
Monart ware became much sought after around the world and in 1947 Monart won royal approval when it made the Princess Elizabeth Wedding Gift set, presented to the Princess and Prince Philip by the City of Perth. The set is now on display at Balmoral Castle.
Monart, a compilation of the Moncrieff and Ysart names, continued to be made at the glassworks on Perth’s St Catherine’s Road until soon after Isobel’s death in 1961.
The auction at Woolley & Wallis on March 20th will offer more than 500 lots for auction. In addition to the Morgan Collection of Monart Glass, the sale includes 88 lots of highly distinctive Clarice Cliff ware; 32 pieces from the Michael Burningham Collection of Carlton Ware and a diverse and exciting range of items from the worlds of pottery, glassware, furniture, jewellery and design.
For information on how to register for online bidding, email enquiries@woolleyandwallis.co.uk or call 01722 424500.